Back pain is a major concern around the globe and it has a significant effect on work productivity and efficiency as hundreds of studies prove.

Focusing on the USA alone, it is estimated that 16 million workers have chronic back pains at any given time.

Mind you, lower back pain not only affects the wellbeing of the employees, but it also has a toll on their overall performance.

Where It Hurts Most

Lower back pain is more common than upper back pain among employees especially those in sedentary jobs. This is because workers in this group spend over 75% of their time at the workplace seated and this tends to put a lot of pressure on the lower back.

The back is a complex structure of bones, muscles, and ligaments. Usually, pain on your back emanates from sprained ligaments, ruptured discs, and strained muscles. Although sports injuries, accidents, diseases and conditions such as obesity and arthritis have the upper hand in terms of causing or complicating back pain, the simplest of activities such as reaching for an awkwardly positioned mouse repeatedly can also lead to strain or sprain of the muscle or ligaments.

For clarity, a strain occurs when a muscle is stretched beyond its limit thereby leading to a tear on the muscle itself. On the other hand, overstretching and tearing the ligaments that connect the bones lead to a sprain.

Sprains and strains aren’t so painful especially if they are minor and don’t result in long-lasting effects. However, the resultant pain can be quite debilitating if it’s acute.

In the next couple of minutes, we’ll be finding out how back pains affect productivity and work efficiency, and how this ailment can be improved.

Of course, it’s the individuals with bad backs that suffer the most as far back pain is concerned. In addition to the physical pain that is caused by sprains and strains, this ailment has also been found to cause physiological effects including depression and stress.

Studies show that close to 30% of people who experience back pains end up falling into depression. A study published in the Journal of National Institutes of Health tried and that sought to establish what concerns employees with lower back pain revealed 5 themes:

According to reports by the World Health Organization (WHO), lower back pain is a major concern and actually one of the leading health-related economic drains. It is estimated that in the USA, over $100 billion are spent on the care and treatment of back pains alone every year.

This explains why low back pain is among WHO’s top 12 priority diseases not only because of its devastating effects on the wellbeing of the employees, but because of its notable effect on the economy too.

Lower back pain is a common malady that affects all groups of workers although disproportionately. According to a report by the United States Bone and Joint Initiative, 72% of low back pain patients are usually under the age of 64 years. WHO states that of this percentage, most of them are usually between 35 and 55 years of age.

Worth mentioning, reports also indicate that 54% of workers who report dealing with low back pains are desk workers who spend a good part of their workday sitting.

This epidemic is slowly peaking among younger workers too and it’s being attributed to their behavior of hunching over their smartphones for prolonged periods especially break times.

This begs the question, what impact does back pain have on the businesses?

Back pains not only affects the general wellbeing of the sufferers themselves, but this is also reflected in the industrial workforce too.

According to WHO, lower back pain is currently the main cause of lost work days. A study done by the American Academy of Orthopaedic Surgeons (AAOS), showed that 25.9 million workers were absent from work for an average of 7.2 workdays in the year 2004. This translates to a loss of approximately 186.5 million workdays for the American workforce. Keep in mind that the cost of presenteeism (reduced productivity at work due to illness) was not factored in here.

Another study cited in the Journal of Industrial and Intelligent Information found that the number of work days lost in Sweden increased from 7 million in 1980 to 28 million by 1987.

To the employers, this comes in the form of lost productivity, idle assets, and other expenses that we’ve discussed below.

To put the lost productivity into perspective, a study done in 1999 and recorded in the American Journal of Public Health showed that employers lost a total of $14 billion on missed work days alone. Factor in inflation 2 decades down the line and the cost could be well over $25 billion today.

In addition to the indirect cost that results from lost productivity, employee back pain also comes with a whole lot of direct expenses:

Most employers are required to foot the medical costs either directly- where they may fund the costs partially or fully- or indirectly through insurance premiums.

In total, it was estimated that about 11% of the total U.S workforce was treated for back pain. Compared to the medical expenses on employees without back pain, it was found out that those with back pain spent $2,200 higher.

In case employees develop back pains or injuries and firmly believe that it was as a result of negligence on the side of the employer, they can make a claim for compensation in form of economic and non-economic damages (together known as compensatory damages).

Economic compensatory damages refer to actual financial losses because of money spent or money that one is not able to earn due to injuries. It includes lost income and wages and medical bills incurred in the past and those expected in the future.

Other forms of non-economic compensatory damages include loss of consortium where an individual is deprived of a normal life with their loved ones and emotional distress damages.

In addition to the cost incurred as a result of lost productivity and expenses on medical bills and compensation, an employer might also be forced to undergo other expenses on hiring and training new employees to replace workers on sick leaves and those who’ve been disabled either short-term or long-term and even permanently.

As a sole proprietor, you tend to suffer a double blow in case of back pain because this ailment not only causes you pain and agony, but it affects your job almost instantly.

Well, although mild and manageable back pains may not result in huge losses in the short run, things can go south very fast in case of sharp pains that lead to temporal or permanent immobilization.

How To Maintain The Right Posture

At this point, it’s evident that back pain impacts directly on a business’ overall productivity, and it may also influence your work efficiency both as an employee or a sole proprietor.

It’s also clear that everyone stands to benefit from understanding how back pain can be prevented and managed.

Regardless of your occupation, the most basic- yet the surest- way of preventing back pains is maintaining an upright posture both when sitting and standing. Finding good chair that supports you in an ergonomic position is also very important.

Here are 3 tips on how to maintain an upright posture when seated:

You can also read more about health and ergonomic work environment in our article here. 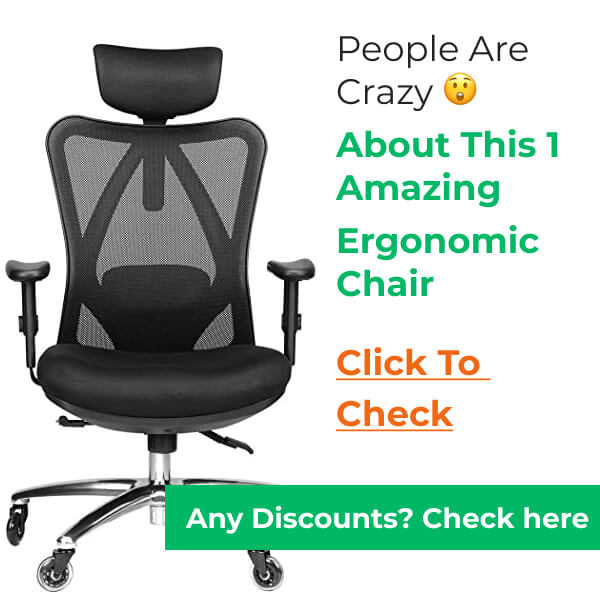 ×
Scroll back to top